To what extent does emotion play a role in religion (faith)?

Three days of service in a special education school in Jimo, Qingdao during the CAS Trip is a great experience to me. I had several TOK moments when I was teaching those special kids, and I want to share one of them, which made me think the most to you today. 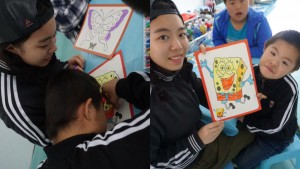 In the middle of my drawing class with some children who have Down’s syndrome, one of them suddenly shouted out “Amen” with joy when he finished his drawing, and others followed him and said “Amen” together. I was surprised that they have the same religion with me. When another kid finished his drawing, he raised his hands and said “Hallelujah!”, and I found myself automatically raised my hand and said “Hallelujah!” with rest of the kids and we laughed. At that moment, I felt the power of faith. I was touched that they could clearly explain Jesus, their belief to me under the condition that they could not fluently communicate with others. This made me think about where did the joys of us come from when we did the religious actions, such as saying “Amen” or “Hallelujah” and to what extent does emotion play a role in religion or faith?

From my religious life, I experienced many emotions like fear, sadness and joy. People pray because of fear for most of the time, and the fear has different levels. As an example of a strong fear, people pray when their friends or families get a serious disease, because they are afraid of losing the one they love. On another side, people pray with a weaker fear, for example they may pray before a presentation or an exam because they are afraid of having a poor performance. Fear, as an emotion leads believers taking a religious action such as pray. After the pray, things always turn to be better, thus people feel joy and thankful, and this strengthens their faith.

Behind these, language plays a role with emotion. Religion has its own language, Christian has Bible and Muslin has Koran, and different religion has different scripture. When people who have the common language meet and communicate with the common language that they all understand, they would feel delighted since they can so easily to understand each other. And they will be awe to the god they believe, while they read the scripture. The communication between the believer is a process of personal knowledge and share knowledge meet together. They share their own personal experience of religion, for sure with emotions. Indeed, the god itself has emotion. The mercy, sympathy and love of god would be presented through the story that the believers share. Listeners feel enthalpy as they take all the emotions and reflect back to their own experience. This makes me think about the time when the missionaries spread religion all around the world. I think the cooperation of emotion and language was the reason why people got converted. Just like the kids in the drawing class trying to explain Jesus to me, they actually acted as the missionaries, who expressed the emotion of themselves and god through language. In this way, with the assistant of language, emotion take a large place in religion and faith.

In summary, Religion and faith is full of emotion. Religious actions create emotion, emotion drives people to take more actions, and after each round of this cycle, people’s faith gets strengthen.

To what extend does reasoning become a strong way of knowing to have objective knowledge? »
« Language and communication